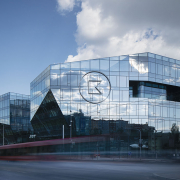 In the beginning of June, KKCG Real Estate Group (KKCG REG) presented a new building complex, BOŘISLAVKA CENTRUM, where the first shops were opened as well.

The office and shopping complex consists of four irregular glass crystals, creating a vibrant local centre directly above the Bořislavka metro station and underlining the importance of the city’s Evropská radial route. The modern architecture is significantly complemented by works by contemporary Czech artists. The KKCG group’s companies owned by the entrepreneur Karel Komárek will move into the new offices in June, too.

After almost 30 years, Prague 6 has managed to resolve, in architectural terms, the complicated plot of land where Evropská, Liberijská and Kladenská streets intersect. The investor, KKCG REG, purchased the land in 2012 and subsequently launched an international architectural design competition. The winning design was prepared by Aulík Fišer Architekti (AFA). The main authors of the design are Jan Aulík and Leoš Horák.

“We pride ourselves on the high quality of all our structures. The ‘Crystals’ at Bořislavka is our biggest project to date and we are very proud of it. It is a valuable contemporary architecture that complements this part of Prague 6 in the urban-development terms. It pleasantly develops civic amenities and offers great working and commercial premises. The unique works of art represent for me the perfect finishing touch to the project,” said Petr Pujman, CEO of KKCG REG. In his opinion, the construction itself, worth more than CZK 3.5 billion, took three years and was managed directly by the investor’s team in cooperation with the construction-management company, Ruby Project Management. “Although the Covid-19 pandemic hampered some of our works, I am happy that we have been able to get the building approved on 30th April, 2021. We will also meet the original plan and bring the entire complex into full operation this year,” added P. Pujman.

Prestigious award prior to completion

Last year, BOŘISLAVKA CENTRUM won the Best International Office Development 2019/2020 award that is presented within the International Property Awards competition in London. “We have followed up on the development of urban schemes for the modern city which we have been focusing on for a long time. Our aim is to find a new form of the urban block development that would be able to evoke the qualities of public space of a historic city, meet the demands placed on the internal environment of the buildings and allow for individual architectural form,” explained architect Jan Aulík, one of the founders of AFA. In accordance with the investor’s instructions, his team created a structure of irregular natural shapes, crystals, on the building plot which gradually and smoothly passes into a park in the eastern part. The geometry of a crystal corresponds to the internal layout and function of the building. The chosen form allows to respond to completely different environments and profile grades of the surrounding streets, while offering unique views of Prague. Although the nature of BOŘISLAVKA CENTRUM is that of an urban block development, it is permeable for the public and naturally interconnects Kladenská and Evropská streets. “The objective of our work was not only the aesthetics of individual buildings and the rationality of their internal layout but, above all, the environment around and between them. The permeable block concept offers a range of public spaces of different nature, largely sunlit and protected from the traffic of Evropská street,” added J. Aulík.

A story in itself of BOŘISLAVKA CENTRUM is fine art that complements the complex. “The fact that the investor of the building, Karel Komárek, and his wife Štěpánka are wise and knowledgeable people plays a huge role here,” commented Petr Pujman. One of the artworks ‘tailor-made for the premises’ is, for example, a glass sculpture called ‘Iceberg’ which illuminates the entrance lobby. It is the largest work made by the Lasvit company in the Czech Republic and one of its largest in the world. Its author is Lasvit’s art director, Maxim Velčovský. “It was a huge challenge for us because we were working with a vast space and a unique technology,” he pointed out. In his opinion, the design respects and emphasises the architectural intent which does not end with the design of the building but is an integration of artistic and design disciplines so that all aspects and elements of the building work in harmony with each other. The entrance lobby is freshened up by an epiphyte consisting of 76 acacia wood poles which are planted with 4,000 green and flowering plants. The creator of this unconventionally conceived garden is the architect Zdeněk Sendler together with the architects who designed the building. He created similar islands of vegetation also on the upper floors of some of the buildings. The artworks have one common idea: we try to bring new approaches, to look for original solutions. And this is not just Lasvit’s ‘Iceberg’, but, for example, a sculpture that is currently being created in Federico Díaz’s workshop.  The sculpture, called ‘Up the Mountain’, evokes an old path that once led through the place, and is being made by a special robotic arm. The work by the Czech-Argentine artist will be completed on the piazzetta between the third and fourth crystals in the autumn.

Office building with shops and services

The buildings were unveiled today and will comprise 30,000 sq m of offices, while more than 60 retail units will use approximately 10,000 sq m of the shopping area. There are also 580 parking spaces underground, where electric charging stations are a matter of course. For office tenants, there is a bike room available including sanitary facilities.

The crystals of the buildings form a new social and business centre of the Prague 6 borough and, at the same time, they will become a new headquarters for companies, belonging to the KKCG group owned by the entrepreneur Karel Komárek. Employees of KKCG, KKCG REG, Sazka, SAZKA Group, MND, KKCG Technologies and others will be moving here in the near future. In the autumn, employees of Škofin (Volkswagen Financial Services), Pražská vodohospodářská společnost (Prague water management company), IGT Czech Republic and MM&C are expected to move here.

At the beginning of June, the first shopping arcade with Lidl store, dm drugstore, Knihy Dobrovský, SAZKA, a branch of Komerční banka, Papírnictví AKM, Tescoma, GRANDOPTICAL, Valmont Tobacco, Deluxe Flowers, Exchange and The Miners Caffee was opened, too. There is barrier-free access from Kladenská Street, directly from the subway and from underground garages. Starting from September, BOŘISLAVKA CENTRUM will expand the range of services to include some more shops and gastro-corners in the second shopping arcade.