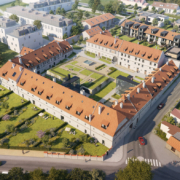 V Invest Development is completing the construction of the second phase of the Jinonický dvůr project in the Jinonice quarter of Prague. 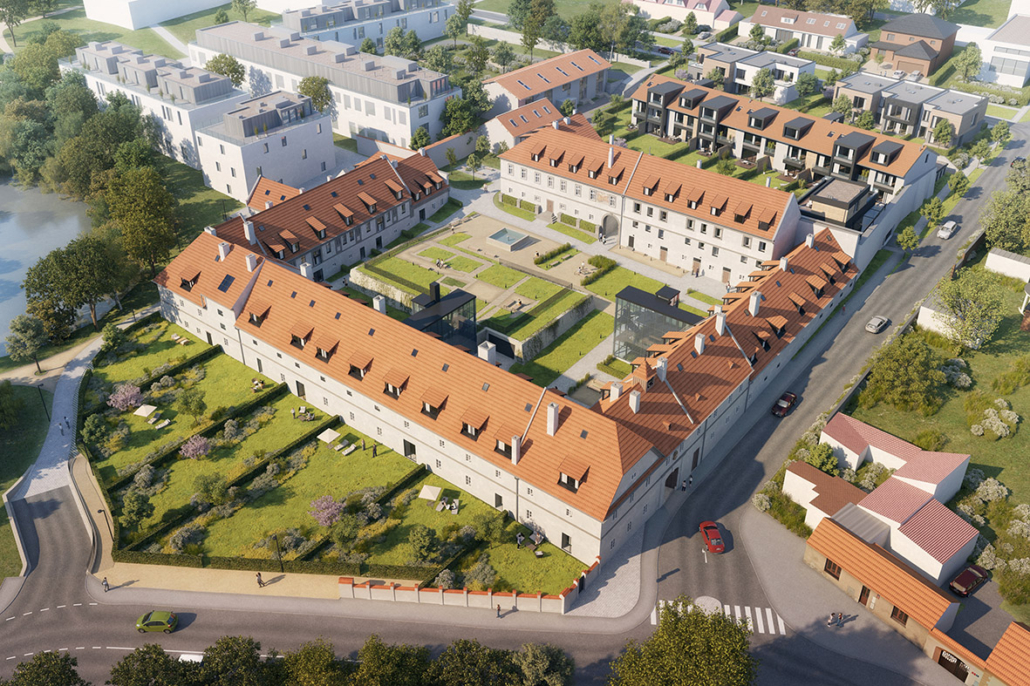 The enclosed area that offers privacy and security will provide its residents with unique housing in 46 units with layouts ranging from bedsit + kitchenette to four-bedroom apartments with kitchenette. The underground garage with plenty of parking spaces, greenery and relaxation zones throughout the building come as a matter of course.

It is no exaggeration to say that the project is like living in a castle. The original site of Jinonický dvůr, maintained as a cultural monument, dates back to the 11th century. It was devastated during the Thirty Years’ War, and in the 17th century it was replaced by a baroque castle. Its subsequent reconstruction with classicist modifications at the beginning of the 19th century is the work of the Schwarzenberg family, which is still remembered in the sandstone sign above the building’s entrance portal.

The current complex is being sensitively renovated due to intensive cooperation with preservationists, who were there to consult every intervention in the original appearance of the building. This helped to preserve maximum of its historical elements and constructions, such as the two-century-old trusses. “Using technology, we created a 3D model and each element in the trusses was assigned a number, which will make it possible to put back those whose condition allows it into their original positions. The rafters in the apartments will be exposed in order to emphasise the centuries-old history of the castle,” says Jan Kukla, Project Manager.

After dismantling, each wooden element is assessed statically and mycologically, and if it is usable, it is returned to its place. If it is partially usable, it is returned after being covered with new wood. Only when the beam is assessed as destroyed is it replaced by a new structure. This is made by carpenters using mortise and tenons, without metal elements. Carpenters work precisely and in the old-fashioned way during the reconstruction. Beamed ceilings and some other original building elements in the interiors of the new apartments will remain exposed.

When in the original complex, you can come across other reconstructed elements that are completely unique and give the whole project an extraordinary genius loci. Whether it is baroque or classicist supporting structures, magnificent ceilings and vaults, the original baroque portal for the staircase to the first floor of the north wing or the restored sundial. The castle’s pride is a tower with a historic clockwork, which contains original elements.

What represented a big challenge for renovation was the beautiful original fountain situated in the grounds of Jinonický dvůr, which is one of the dominant features of the common outdoor areas of the enclosed complex. Preservationists helped with the placement of the original dismantled fountain above the ceiling of the underground garages. The goal was for the fountain to work but not leak out into the garages. The only system that does not let through any moisture is the historically proven lead tub, which was also part of the original fountain, and was therefore retained in the new refurbished one, which was carefully dismantled and returned to its original place.

“Working with the preservationists was very fiddly in order to help to fine-tune every detail. But they also allowed us modern elements, for instance the frameless windows on the facade of the former granary, which filled the previously blank elements. The very modern structures thus support the historical essence of the building. The same applies to dormer-windows, where we also discussed everything with the preservationists intensively. And the situation was similar with the construction of replica chimneys, which do not serve, in their new form, to exhaust combustion products, but as outlets for air conditioning and ventilation,” explains Jan Kukla. 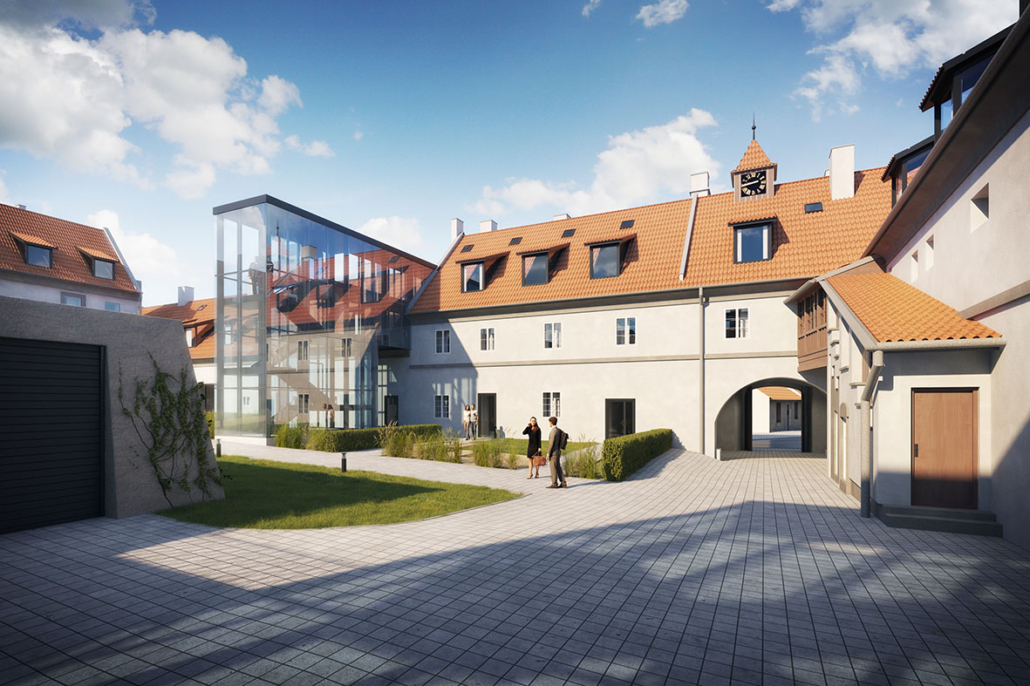 Modern housing in a historic complex

The Jinonický dvůr project offers units with layouts ranging from bedsit + kitchenette to four-bedroom units that are exceptional in terms of their disposition, layout and spaciousness. This is premium housing of a high standard with elements of the original architecture, which can be felt in every corner. With regard to safety and privacy, Jinonický dvůr is built as an enclosed and impassable monitored area, where all traffic is diverted to the underground. No one within the entire area will be disturbed by passing cars then. Emphasis was also placed on plenty of greenery, front gardens and relaxation zones.

Completion of the second phase of the Jinonický dvůr project is planned for the second quarter of 2023, and the currently available units can be found at www.vinvest.cz.