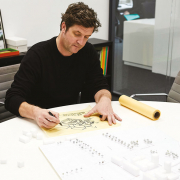 It is always interesting to watch real estate markets across continents. Each market has its own specifics given the climate, the economic situation of the country, modern local trends, culture and many other aspects. And, of course, the winning idea and design also play a role in the final implementation.

Schools and related buildings are a very specific sponsorship of the real estate market. And even here it is true that each country, and therefore the continent to an even greater extent, has its specific requirements. Development News magazine has been a regular media partner of the prestigious competition Building of the Year in the category of the Foreign Construction of the Year. One of this year’s nominated projects is Bogle Architects’ the Royal Grammar School Guildford in Dubai, UAE. The founder of the company, Ian Bogle, introduced this project to us.

This is not the first time you took  part in Building of the Year. How do you perceive this competition compared to other events you participate in around the world?

As an international firm, we like to showcase our projects in both local and international awards. We’ve taken part, and won, in the Building of the Year before, so we like to think we have a good chance of winning again in this prestigious competition. We have won several international awards over the last nine years, since we started the practice, but it’s always rewarding to be recognized locally for our international work.

You received the nomination for the school project in Dubai. In general, what are the current requirements of investors for this type of construction?

The international school market, while competitive, is still a growing market therefore the investors are looking for a point of differentiation. In this instance, we were tasked with not only applying the needs of a normal school
curriculum but also adding features/motifs from the 500-year-old parent school in Guildford but also designing a sustainable solution for this particular climate. The large diagonal roof harks back to the historical leaded windows of the chained library at the Guildford school. Another interesting feature of the building is the local (KHDA – Knowledge and Human Development Association) guidance that requires all children up to the age of six to have their main classroom located on the ground floor. Due to the capacity of the school (more  than 2,000 students) it dictated the overall length of the building which if it were turned on its end it would be three-storeys taller than the Gherkin in London which I worked on while at Foster many years back.

Are there any special systems or materials used on this construction site?

We designed the building to be ‘self-shading’ given the climate and as such a cantilevering concrete frame was used to provide this shading. This means that all the classrooms are not directly exposed to the Dubai sunshine allowing for a reduction in the building’s overall cooling loads which goes someway, when offset against the photovoltaic systems utilized on site, to create a net zero solution. The resulting internal atrium creates a more contained space for the younger children at the ground floor opening up to the oldest, 6th form young adults, on the top floor. The atrium is 50% covered with an ETFE roof to allow for natural light to penetrate deep into the space below – a solution we also used on the Early Learning Village in Singapore which was lucky enough to win this award previously.

How does the assignment for an investor for such a project in the UAE differ from, for example, in Europe?

The main difference is the United Arab Emirates climate which is very different to the European climate where temperatures range from 22 °C in the winter to way over 40 °C in the height of summer. We knew we had to design an environmentally progressive solution so this had a major impact on the design as described above. There are other micro economic issues particular to the local market that also need to be considered in the school offering for Dubai, e.g., we had a very long debate about whether the swimming pools should be internal or external. We ultimately, collectively, decided on a covered external solution that was partially shaded by deep precast concrete panels, giving a dappled light effect, but also allowing for natural cross ventilation.

What did the investor place the main emphasis on in the school project? What was your main concern?

The investor is a global school provider hence the main emphasis on the school project – they have 85 school in 11 countries around the world but this was their first project in the Middle East so we had to make a statement with not only the building but also the educational offer which drove a number of the design decisions. Our challenge was to marry the principles of the 500-year old school at Guildford in the United Kingdom, alongside the requirements of the KHDA in Dubai in the UAE climate. The resultant development is a paragon in both the educational offer but also a step change in the design of K-12 educational environments. We also wanted to make the building like an ‘oasis in the desert’ hence why we have a great deal of green walls and living trees within the internal atriums which also help to the wellbeing of pupils and staff in the learning environment.

If you would have to find five words to characterize this project, which ones would you have chosen?

You are working on a whole range of different projects. What prevails after a pandemic?

Yes, we’ve been approached to work on a number of new projects both locally and internationally throughout the pandemic but it has certainly been a challenging period. The interesting part is that we have looked at new projects in locations without actually physically visiting the site which goes against our golden rule of always visiting the location to understand the ‘feel’ of a place and not just the urban, rural or coastal context. This obviously couldn’t be helped because of the travel restrictions imposed by the various governments in response to the Pandemic but it does show that a more digital solution can work almost as well – but we will start visiting these locations again as it is so important to the quality of the resultant design.

What beautiful buildings can we look forward to from your studio in Prague?

We’ve recently completed the commercial office component of our Astrid project in P7 and the SOLID 21 laboratory project opened officially on 22nd September in P8. We also have a number of projects on the go that will soon be being constructed in and around Prague in the commercial, residential, education and leisure sectors – watch this space!