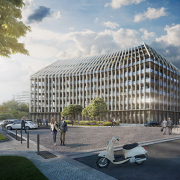 The gap site between Verdunská and Jugoslávských partyzánů streets in Prague – Dejvice, near Vítězné Square, will take on a new shape. Or more precisely, it will vanish.

At the beginning of July, the building authority for Prague 6 issued a permit for the construction of Victoria Palace, a residential building to be built there by the development consortium of Penta Real Estate and Kaprain. This will end almost a century of groping around as to what to do with the place that is part of the valued concept of Vítězné (Victory) Square by the architect Engel from the 1920s. His vision was a modern cut of the north-western city modelled on the reconstruction of Paris in the 19th century; The Vítězné Square was to be the centre of events with a well-thought-out
arrangement of buildings in a circular floor plan. Due to the economic crisis and the World War II, only a torso remained from the original idea. It was not until 2010 that the LINE project by architect Radan Hubička, who developed it for PPF, was to change the location of today’s gap site. Whilst primarily the office building won the award as the project of 2013, the public nor some experts accepted it, though. The building permit for Victoria Palace therefore makes it possible, after many decades, to complete the missing piece of the story of the architectural change for the entire centre of Prague 6.

With respect to history

The architectural studio Jakub Cigler Architekti (JCA) suggested for the gap site a residential building that would represent an elegant modern realization of the original idea regarding the appearance of this part of the square. According to Engel’s concept, the building in today’s gap site was to be the axial counterpart of the Army General Staff building. In the plans, the two buildings were the same, only mirror-inverted.

Victoria with an overview

The Penta Real Estate and Kaprain consortium will build a nine-storey building in Vítězné Square for about a billion crowns. The building will come with a total of 97 flats, two underground floors for technical facilities, cellars and mainly 135 parking spaces. This will thus create 7,200 sq m of living space and 1,800 sq m for retail and services in an area of over 4,200 sq m. According to the requirements of the city district, there will be a supermarket, a pharmacy, a bank branch and also a mobile network operator. The apartments will be among the top offers in the capital. The larger one’s face both sides of the building – i. e. the square and the peaceful zone of a courtyard. The vast majority then come with outdoor loggias or terraces. This category of apartments is characterized by a high proportion of natural materials, and premium brands come as a matter of course with regards to the equipment. The open glazed facade divided by vertical lamellas, which is the dominant element of the building, allows a rich transmission of light into the interior of all residential units. “We have a number of higher standard residential projects that are of greatest interest in the market under construction,” says David Musil, Residential Development Manager at Penta Real Estate, adding: “Victoria is a different story. It has the same character as Trafalgar Square in London or the Leipziger Platz in Berlin. Places that do not fall asleep. Victoria represents exceptional housing in Prague, for which the price corresponds.” The apartments will be put on for sale in the near future. According to preliminary information, the price of a studio apartment, i. e. 33 sq m bedsit with kitchenette, exceeds CZK 7 million. The very best that Victoria has to offer are four penthouses situated on the top two floors, with sizes ranging from 130 to 202 sq m and terraces from 80 to 236 sq m. These apartments, for which their future owners can get directly from an elevator, will require tens of millions of Czech crowns.

A private garden in the courtyard will be available for the apartment owners; It is almost pointless to emphasize that it will come with trees, plenty of greenery and a water feature. This is just another of the benefits that are obvious to anyone who knows Prague: Victoria Palace will become part of the centre of the Prague location, which is characteristic for traditional residential functions in highly regarded areas, such as Ořechovka, Hanspaulka and the area surrounding Vítězné Square. Prague 6 alone is a city district with large green areas, to which we can also include a part of Prague’s Stromovka. It is no coincidence that this part of Prague has been chosen by a number of countries for their embassies. Victoria Palace is located close to the underground and Václav Havel Airport is also easily accessible.

Penta Real Estate has currently started preparing a building site and the Victoria Palace residence should be completed before the fourth quarter of 2023.