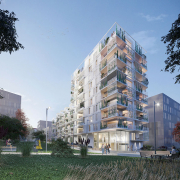 A new Village im Dritten district will be created by 2026 in the middle of Vienna’s third district, offering sustainable and ecological housing for approximately 4,000 people. Less than half of the apartments will be supported by the city.

Within five years, Vienna’s Council aims to construct a new district in Vienna’s lucrative third district near Landstrasse in cooperation with ARE Austrian Real Estate. The new project will cover an area of 11 hectares and provide a home for 4,000 residents. Less than half of the total of 1,900 housing units are city-supported apartments, of which there should be a total of eight hundred. The project, which the council has been preparing for 10 years, is not the only ecological complex of new buildings. The Eurogate project, the largest housing estate for passive houses in Europe, was established nearby in 2007.

According to the representatives of Vienna Council, the most important thing in the construction of the new district is affordability, the high quality of the materials used and their use in everyday life. The central principle is then sustainability, which is why the council bet on enough greenery, building tempering, shading and proper wind circulation in the new project. Vienna also achieves a reduction in the temperature in the apartments with suitable glazing, effective sun protection, and good ventilation of the apartments and climate-neutral regulation of the building temperature, i.e. mild cooling by means of heat dissipation, in urban construction projects. Effective greening of the roof and façade, shading of common areas and paths, favourable surface design, rainwater retention and the provision of adequate ventilation also help to further reduce the temperature.

The new district also considers common areas. All residential buildings are to be equipped with green facades as well as roof gardens and terraces, which residents will be able to use together with neighbours. The city plans to build shady lounges in the courtyards, which can be a haven and a meeting place. Apart from fitness offers, there will be various playgrounds for all age groups as well as mist jets and water games for further cooling in the hot summer months. The spacious two-hectare central park will also include playing and sports areas and a dog zone. Other parts of the public space are designed near nature, such as urban wilderness or urban forest. Of course, there will also be a nursery school, shops and restaurants.

According to the council, the new city district should play a pioneering role and become a so-called laboratory, which is to test a wide range of measures that will be standard in the future.