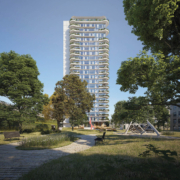 Studio AI – DESIGN (Architecture Interior DESIGN) was founded in 1999 by Eva Jiřičná and Petr Vágner. They offer comprehensive services from the design of new public and private buildings, bridges, reconstructions to complete interior designs, exhibitions, furniture and other unique items.

Their realizations include the design hotel Josef in Prague, a New Orangery at Prague Castle, the reconstruction of St. Anne’s Church in Prague, the VIZE 97 Dagmar and Václav Havel Foundation, the Sky Barrandov apartment complex, the Zlín Congress Centre and the new Faculty of Humanities of Tomaš Baťa University in Zlín. The studio has
received many awards abroad and in our country for their realizations, including the Grand Prix of the Community of Architects. Architect Petr Vágner talked to us about what they are currently preparing. 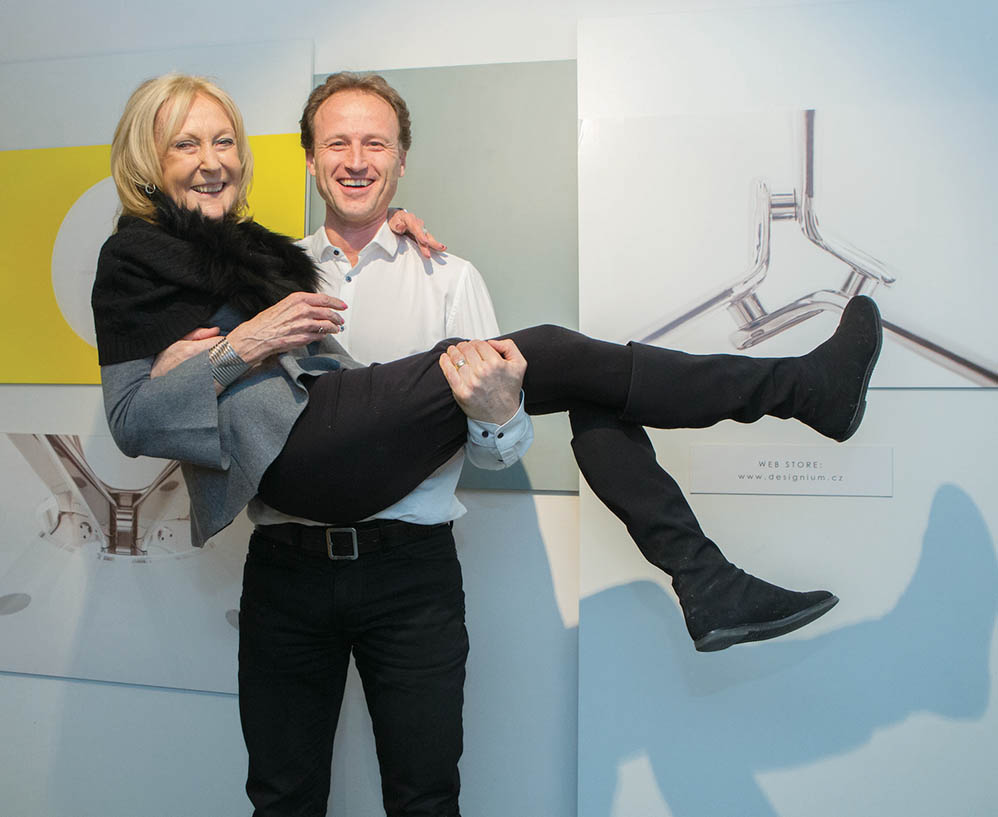 What is your opinion regarding high-rise buildings and their implementation in the Czech environment? The situation for skyscrapers is not a bed of roses here.

I think that we will eventually be forced to do so by using the plots just as we are now using the landscape countryside. The buildings are spreading wide, so it will happen here just as it did in other metropolises. I agree that we must be careful not to destroy the panorama of Prague, which is unique, but there are, on the other hand, already defined places where it will have no effect if there are five or more skyscrapers there. What is rather more interesting to see now is that UNESCO enters into the arrangements of Prague quite significantly and comments on high-rise construction, or actually does so in such a way so that there is no high-rise construction at all. Heritage preservation and other institutions are happy to hear this opinion, because they only identify with it and don’t have to deliver it themselves. That doesn’t add much to high-rise buildings.

It was a tender rather than a competition. The city chose this form, approached at least 5–10 architectural offices and our task was to present a description of what we would like to do with the new building, and of course,
we had to include references and price. Based on this, we were finally selected to carry out the study.

How did you attract the jury compared to the other candidates? It is actually a reconstruction of the building, which was designed in 1968 as an experimental project by architect Jan Slezák in the Jindřiška housing estate in Ostrava.

I have no idea what proposals the others submitted. We naturally wanted to preserve the building as much as the council did. We described the way our process should proceed because the building comes with some history. There are a lot of legends about it claiming that it moved, that the statics are bad, etc., so we teamed up with local structural engineers who work directly in Ostrava and are concrete specialists, such as Ing. Šeligová, and others. Our concept was based on a comprehensive analysis of the current situation, so that we didn’t show something that perhaps couldn’t be realized, but so that we could try to grasp it realistically if possible. Maybe that was the thing that did it. I don’t know.

What is the condition of the building now and what is your idea of reconstruction?

The reinforced concrete structure should remain, it is sufficient enough to support another floor. That’s why we considered raising the building. Calculations and construction-technical research show that we could add one floor for a lookout café. We will have the construction completely cleaned. According to our design, there should be really comfortable apartments with a nice view and balconies, which should be, according to static analysis, only positioned on the corners of the structure. Measurements have been carried out for three months now and we monitor whether the structure moves and under what conditions. According to the results of the surveys we’ll see if the proposal can be implemented.

What do you expect from the extension of the next floor?

It should definitely be an attraction. There is a beautiful view from there. From the 22nd floor you can see the whole of Ostrava. However, in the Lower Vítkovice area there is the Bolt Tower, where there already is a café up high, and the town hall with a lookout tower is also nearby. We discussed with the council whether the café is suitable for this place. Eventually we designed the space as multifunctional and theoretically it is possible that there will be no café, but a different operation. There will be access and the possibility of supply, so we’ll see.

The building will then be entered by residents of the apartments and visitors to this place, no matter what’s there. How will the safety of the population be ensured?

There will be an entrance lobby with a reception desk and lifts. Clients will receive a chip to get to their floors – and no one else will be able to go there. Another important thing we addressed was the original communication core in the centre of the building, which does not meet current fire regulations. That is why we added another core from the north side with two lifts and an escape staircase –and that’s what the reception is next to.

What size of apartments does the design account for?

The size of the apartments increases from the lower floors upwards, i.e. downstairs are bedsits and one bedroom apartments with kitchenettes and on the four highest floors, there are 2× four beautiful maisonettes, each of which has a corner balcony and an inner open space over two floors. I think it will be very attractive housing. We would like the building to be green. It is topical now, but we consulted this with Mr. Sendler, a landscape architect, who was recommended to us by the architect Pleskot, so that we could design the most suitable greenery for the individual cardinal points. We want the flower beds built into the balconies to have central irrigation and to be able to be maintained without bothering the tenants yet without letting the plants wither. We still need to solve this in the next stages of the project.

Will the apartments belong to the city and what is the realization schedule?

It is still open. The city is suffering a bit as a result of Covid, so funding is somewhat limited, but they are actively looking for a way as to how to allow for the project to continue. The latest information is that the way to go is by the use of a PPP project, i.e. Public Private Partnership. What is positive for us is that it has not been thrown off the table yet and it should not be stopped. On the contrary, the city is looking for a way as to how to launch the project.

How is it looking with the total price for the project?

After pricing the project, we arrived at an amount of approximately CZK 400 million. Let’s hope no additional costs are to occur. According to preliminary geological surveys, the subsoil should be fine, but we have more probes ahead of us, of course, and we will have to do a survey. The big advantage is that the house is already standing there. I doubt it would be realistic to push through a high-rise building into this zone.

The skyscraper is situated in the very centre of Ostrava then…

It is a residential area, a short way from the municipal authority, a short way from the river, surrounded by parks. Traffic can be a problem because the surrounding streets are busy. At the same time as the building, we have to deal with parking and we will have to build a park house, which will take up space where there is currently a car park. Originally, we wanted to restore the park, which was historically there and realise the car park in the place of a low building, which is adjacent to ours. In the end, we had to work out three options for the city on how best to solve it.

How is communication with the inhabitants from the immediate vicinity?

I must say that we had a very good experience with the city management with regards to the elaboration of the investment plan. They are mostly young, smart people and working with them is great. After the completion of the investment plan, we were faced with covid, so the public hearing took place via live broadcast on Youtube. Attendance was relatively broad. Apart from the public hearing, there was also a hearing for specialists. It was an interesting debate.

What topics were discussed?

The building currently has a certain appearance and our design is changing it. So, the debate was about whether it was appropriate to change the appearance the way we were doing, or whether we should respect the current appearance more.

What other projects are you working on?

In the summer, we should start building Obláček, which is an extension of the University Hospital Plzeň in Lochotín. It’s a project that lay untouched for about 10 or 12 years and has now been set in motion. It will house the Czech National Register of Bone Marrow Donors. In Zlín, we are reconstructing a large auditorium for Tomáš Baťa University, preparations are continuing on Rohanské nábřeží and construction of two apartment buildings and one administrative building for Sekyra Group is to begin. In Pardubice, we completed the renovation of the castle, where we will reconstruct the social wing. On the second floor, there should be a hall for about 220 people; now we should start working on the implementing study.

You work in the studio with the architect Eva Jiřičná, who lives in London. Do you feel the impact of Brexit?

We haven’t felt the effects of Brexit much yet. We were much more affected by covid, because Eva has been locked in London for over a year. But on the other hand, we learnt to work at home office here, we like it and, so far, it’s been working for us. Even working from a distance with Eva works perfectly. We have a debate on individual projects at least once a day, optimally twice a day, and I think that is very beneficial. As Eva used to come here regularly, we were not as connected as we are now. The frequency in communication is greater and is more efficient. From our colleagues in the Netherlands, we’ve mostly learned to use Zoom, the advantage of which is that anyone involved can paint directly on the shared screen. We used to work through Teams and said: “You need to do this and that in the right corner…”, but now we can zoom it in, paint… Such information is very well shared. This is actually a benefit of these times!

The existing building was built between 1965 and 1968 as part of the Jindřiška housing estate; it has shown certain technical and operational problems over the years. The skyscraper has 22 floors and was originally used as an apartment building. Later, the layout was adapted to office space. Furthermore, the perimeter cladding or more precisely unsuitable façade panels, which show considerable damage and at the same time contain asbestos, were replaced. The building hasn’t been used since 2013.

The construction system consists of a combination of a concrete skeleton and a monolithic core around the stairwell with bar elements of girders and columns. At present, we do not have documents for ceiling cavity panels, so it is also necessary to perform a construction technical survey with the required tests. A sufficient load-bearing capacity of the load-bearing structure, which was confirmed by static assessment and calculations within the design elaboration, was found thanks to the preliminary technical assessment from 2012.