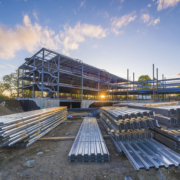 Developers’ fees for city and municipal treasury are nothing but a sector tax. That needs to be pointed out regardless of whether the developers agree with it or not.

This eventually always shows in the price of the product – apartments, administrative premises, storage and other buildings. What is, however, spoken little of is why this necessity actually originated. That is that it is about an entirely absurd replacement of money that developers and tax payers pay in taxes. Unfortunately, the money does not come from where it originates, that is into the budgets of relevant self-governments, but into the state treasury, which subsequently reallocates it unjustly and illogically. That means that the fees from development punish developers for poorly set budgetary tax assignment (RUD).

We can demonstrate twisted the whole system is on an example in Prague. Development activities in the area of residential housing within the territory of the capital city of Prague achieved a turnover of approximately CZK 32.7 billion in 2019 (direct effect). As for other segments, this activity led to increased turnover by CZK 41.1 billion (indirect effect). Turnovers within the whole economy increased through paid salaries for work associated with both a direct and indirect effect by a further CZK 16.7 billion (induced effect). So, the overall influence of development activities in Prague reached a turnover of CZK 90.5 billion. In the case of added value, this represents an impact of CZK 30.6 billion. If we, however, look at information about nationwide tax collection in 2019, the elasticity of the individual tax types and the amount of stated numbers, we arrive at a shocking revelation. And that is that in 2019, CZK 14.2 billion was collected in Prague thanks to development and CZK 11.6 billion from that went straight to the state budget (that is more than 80%). CZK 0.7 billion went to the regions and CZK 1.9 billion to towns and municipalities. Prague, in particular, then gets approximately CZK 550 million from the total CZK 90.5 billion from the aforementioned tax collection. What can then be estimated in detail is the fact that this amount compiles CZK 198 million from income tax from natural persons, CZK 149 million from income tax from legal persons and CZK 198 million from value added tax. That means that Prague only got 0.49% back from the value that originated within its territory. And that is why they are looking to get money they could use for different purposes. Money for these were already paid via taxes but didn’t get where they should have.

How to get out?

The example that a well-set system can lead to correct solutions may be seen in Germany. Resulting from an analysis by the consultancy company KPMG is that a 25,000-sq m hall with 140 employees generates in Czech almost CZK 3 billion in taxes and insurance over 30 years; in Germany, it is over CZK 3.5 billion. But, whilst the Czech municipality gets CZK 15 million from the hall, the German one gets CZK 1.6 billion.

So, if we want to discuss the need of towns and municipalities in connection with their development, let’s not forget the basic issue: Developers have already paid their share in taxes. Dozens of billions of Czech crowns a year. Let’s not punish developers and their clients, ordinary residents of the apartments, people working in offices and logistics centres, warehouses and factories for a non-functional system, which relocates money absurdly. The right way lies in the direct interconnection of value in the place of its origin with the income of town and municipality budgets. Higher tax income for towns and municipalities could help pay necessities associated with their development and logically also improve relationship with townhalls and their representatives. And last but not least, they might, for instance, lead to a reduced price of apartments in the Czech Republic.

Tomáš Kadeřábek, Manager of the Association of Developers / photo: depositphotos