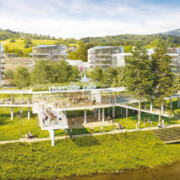 I used to go to the Polish town of Wisła to see the sculptor Grzegorz Michałek-Janosik for whom I organized an exhibition of his wooden sculptures at the Centre of City of the Future at CIIRC ČVUT last year.

One evening we were coming back from a bar in the largest hotel in Wisła, which stands out over the town as does an ocean liner over a port. I looked down at the town that spread out below us. Just in front of us, in the vicinity of the house where my friend Grzegorz lives and has his studio, I spotted a large undeveloped area. I gave it some thought and gave Grzegorz a rhetorical question: It would be a great plot for development, wouldn’t it? Do you know who owns it? And he just answered innocently and started to laugh: My father-in-law. A few more months passed before we met with Grzegorz’s father-in-law Jerzy Stańko. Already during our first meeting I wished we could work on this project.

Jerzy purchased the plot more than 20 years ago. At that time, everyone wondered why he did that. When they later realised, those, who had wondered before, were clutching their heads as they are the only plots that can be actually be built on in the town centre to this extent.

What was important for Jerzy was that he was born and lived near Wisła and it is his heart’s issue to build something here and leave it to his children. He was fortunate that he was doing so well in business. After our discussion and presentation of my idea as to how to develop the area, we came to an agreement and, on this occasion, also went to visit the mayor. We agreed that we would also include within the project land, which is situated in this area and could become a part of the new business and cultural centre of the town of Wisła. We agreed that the assignment would also include an experimental theatre and common underground garages; the whole project will naturally have connection to the existing outline plan. Within the framework of that, there will also be applied those necessary changes that would allow the project to be realized for the benefit of the whole town.

The next consultation with the mayor and other town representatives played an important part when forming this particular area and preparation of the final proposal. The result can be seen in a visualization and animation video, which was executed by Studio Horák. The aim was to create an idea about an architectural-urban arrangement of the whole area and its possible functional utilization. The architecture of individual buildings will be dealt with within the projects for individual buildings. What was important was to define the area from a spatial point of view and determine set limits. The study assumes that a major part of the parterre will comprise a pedestrian zone with shops, bars, restaurants and units providing visitors with other services and with minimal disturbance from individual automobile transportation. There is also a plan to fit the whole project with intelligent technologies, which are to help optimize all processes that are to take place there, in connection with its neighbourhood.

The whole process was slowed by the situation with COVID-19. We are currently waiting for presentation to the town of Wisła. The client had a presentation video completed, which shows that it is not only one of many development projects whose aim is to gain maximum profit but that it is a project with which the person who grew up there wants to contribute to the thriving development of the town and also have respect to its past development and genius loci.