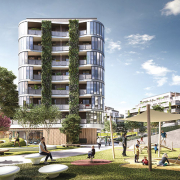 UBM Development Czechia is a development company which has operated in the Czech market for 27 years. The Czech branch of the significant Austrian developer UBM Development AG is not afraid to get down to non-traditional, large and complex projects.

We discussed the company’s activities with their Director, Josef Wiedermann.

Can you introduce UBM and its operation in the Czech market?

Our very first activity was the reconstruction of the neo-Baroque palace Darex situated at Wenceslas Square. Now we mainly attend to residence construction and also the construction of administrative buildings and hotels. We look for interesting projects for acquisition, in particular in the segment of residential housing. As for Prague, we currently have the realization of a total of 650 residential units ready. What comes as a distinct advantage is the fact that we are able to cover the whole development process ourselves. We, for instance, have our own experienced team of architects and civil engineers led by Helmut Berghofer who work for most of the countries we operate in. They prepare all levels of project documentation – from studies to interior design.

Where else are you active in Europe and in what way?

Apart from the Czech Republic, we also realize projects for leading European metropolises in Austria, Germany and Poland. We strategically focus on residential and administrative projects just as they do in our country. With more than 145 years of history, UBM is the only provider that covers the whole development process via their own resources, from initial planning to marketing and ultimate sale.

What Czech projects historically belong to those most successful?

It is difficult to select the most successful projects but if I was to speak of the largest then, it is, no doubt, the multifunctional project Anděl City at Smíchov, Prague, comprising 14 buildings within the complex of the former Tatra factory, which was constructed in three stages and changed the original appearance of Anděl at Smíchov. There we built two designer hotels, Angelo and Andel´s, the multiscreen cinema CineStar (at that time called Cinema) with underground garages with a capacity of 436 parking places, five administrative buildings, which used to house Czech branches of global giants such as Cetelem or Maersk. The whole project was completed with two residential buildings with 106 and 109 apartments and an apartment building that belongs to Andel´s Hotel. This location also offers our current luxurious residential project NEUGRAF, which is under construction. It comprises 177 apartments with communal terrace on the roof of the southern wing and a private wellness. The conversion of the historical building to the Le Palais Hotel also represented a special project and so does the present reconstruction of Cukrovarnický Palace at Senovážné Square, transforming it into the Hotel Andaz Prague, the top line of the Hyatt Hotels chain. It is, so far, also UBM’s biggest investment in the Czech Republic.

A large residential project is being built on the boundaries of Stodůlky and Řeporyje. How many apartments are you planning there and in what time horizon?

Arcus City is our new project situated in the south-west part of the city. It will be realized in three stages and will provide 284 residential units and 26 family houses. In June we commenced the pre-sale of the first stage, which comprises 100 units and is to be completed in 2023. Other stages are to follow in a relatively speedy sequence. The second stage will be put onto the market during next year. The first phase of the residential development offers two categories – Comfort and Penthouse. They both come with an above standard quality of all utilized materials, from wooden windows and floors to quality sanitary products and tiles.

What is typical of Arcus City? How does it differ from other projects in this location?

Arcus City, as its name suggests, will create a new compact complex of a large area, which includes housing in residential and family houses, commercial premises and a new bus stop. The complex of these is to provide residents with comprehensive self-contained comfort as well as a quick connection with Stodůlky underground station. The whole area also includes a large number of possibilities for relaxation and sports complemented with new greenery, even though there is a direct connection to Řepora open-air museum. Another significant difference lies in the quality of standards I have already mentioned, both in the residential units as well as building technology such as strengthened walls for better acoustic insulation.

Are you also accounting with the development of civic amenities and commercial premises?

Commercial premises will be situated in the centre of the project as a part of ground floors of residential buildings, which belong to the second stage. It is therefore to complete an imaginary square of all three stages.

The architectural project is executed ingeniously into an arch shape so the buildings are distributed in such a way that they are enclosed. Windows face the inner block or enjoy a south or south-easterly view of Řeporyje and Zbuzany. Jeremiášova and Poncarova Streets therefore remain at the back of the residents.

Are you planning any measures regarding this?

Apart from the concept of building as such, we are also to strengthen the green strip that leads to Poncarova Street, which already partly separates them and with regards to the naturally rippled terrain, which is several metres higher by the road, we consider it totally sufficient.