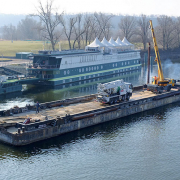 The building industry has also seen an unexpected deviation and a slowdown in all projects this year. But the pace is slowly getting back to normal thanks to the greater need for new apartments, offices and schools in Prague.

A great number of heavy lorries daily bring building materials to Prague and take away a considerable amount of extracted rocks and scrap.

Freight transportation produces a large amount of emissions, devastates roads, worsens the already busy traffic and last but not least increases dustiness and noise levels. They are looking for new ways as to how to relieve Prague traffic. There is the option of using the Vltava River, which runs through the city centre, in order to supply the city with building materials. The two concrete mixing plants situated in Prague‘s centre, which maximally utilize shipping transport for their supplies due to their ports on Vltava riverbanks, can set the example.

New apartments, administrative buildings, parking buildings, schools and other buildings of civic amenities are continued being built in the capital. In the city centre there are many brownfields intended for development. They are also planning massive investment in the road infrastructure in the city. The key is to complete the inner ring road running from the northern opening of the Blanka tunnel through Balabenka and Jarov all the way to Průmyslová Street and then the interconnection of the Rozvadov junction (beginning of the D5 motorway) with the ring road at Zlíchov, connection of Ruzyně Airport, the D route underground, reconstruction of the Libeň Bridge and construction of the new bridge Holešovice – Karlín

A basic commodity that is being used in the construction of large infrastructure projects is concrete, which is produced in concrete mixing plants that need to be situated as close as possible to the construction site so that the material can be delivered to the construction site fresh, before it starts to harden. Concrete comprises four main materials – aggregate, cement, additives and water. Some 80% of the total volume of the concrete comprises aggregate and sand, are brought from stone and sand quarries north of Prague. Most of Prague’s concrete mixing plants is supplied via lorries. One lorry brings approximately 30 tons of aggregate. If we take into consideration specialists’ estimates that the necessary amount of concrete a year will be more than 1 million cubic metres, the amount of aggregate necessary to be delivered every year is about 2 million tons, which corresponds to more than 60,000 lorries.

How to replace thousands of lorries a year?

There is a way to reduce this number of lorries considerably. We can find inspiration in Vienna, Hamburg, London, Brussels or Paris, where they have been utilizing the river for city supplies for many years. Prague does not lag behind there either. There are two modern concrete mixing plants that have been utilizing river transportation for years situated in the city centre on the banks of the Vltava River. The concrete mixing plant Rohanský ostrov and concrete mixing plant Libeň are modern ecological operations, which meet strict environmental management criteria ISO 14001 and have a port for ship transport. Up to 80% of all material, which is necessary for concrete production, is shipped. One ship replaces 33 lorries. With current production, the two concrete mixing plants deliver almost 400,000 tons of aggregate, which relieves the capital of 13,000 lorries every year. Due to the increased requirement for concrete, it is necessary to relieve the city of up to 20,000 lorries a year, that is approximately one third of the total amount of aggregate delivered to Prague. During the existence period of these two concrete mixing plants, Prague has already been relieved of more than 250,000 lorries. Concrete from these operations was utilised during the construction of almost all important constructions in Prague: all stages of Prague underground, Blanka, Strahovský and Zlíchov tunnels, railway tunnels of Nové spojení, Trojský Bridge as well as the National Technical Library and recently also the New Water Line ÚČOV, etc.

Vltava – the largest motorway in Prague