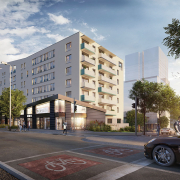 The new Lappi Hloubětín project will be built in the immediate vicinity of the Suomi Hloubětín residential complex, thus expanding the Finnish district in Prague.

Almost 290 Finnish-style low-energy apartments and eight commercial premises will be built in three stages – Ranua, Kemi and Tornio – on a plot of about 1.2 ha, while the developer plans to put the first housing units on sale this autumn. Several dozens of apartments from the entire project will then be set aside for rental housing. YIT is now starting construction and the new owners should be able to move in at the turn of 2023 and 2024.

The new Finnish district in Prague will expand

The construction of the Lappi Hloubětín project between Kolbenova, Laponská and Granitova streets will begin with the Kemi and Ranua apartment buildings, followed by Tornio. It is Tornio that will bestow the whole complex with a distinctive face – it will take the form of a thirteen-storey tower.

“Our vision for the Suomi and Lappi Hloubětín projects was to cultivate the area of the original brownfield and turn it into a modern city district. We are very happy that we are doing well and that hundreds of satisfied families have already found their new housing in Suomi Hloubětín. Lappi Hloubětín will naturally follow with its urban design and style. A completely new Finnish district Is being born here and is to include approximately 1,200 apartments making it one of the largest residential complexes in Prague. There really is tremendous interest in the location: The apartments from almost every one of the stages implemented so far in Suomi Hloubětín were sold out before final building approval,” says Marek Lokaj, the Managing Director of YIT Stavo, adding: “Moreover, we plan, for the Lappi project, rental housing for people who don’t want to or cannot acquire the apartment into personal ownership.”

The architectural design, as in the case of Suomi Hloubětín, came from the workshop of the Loxia studio. Continuity was thus maintained: the whole concept is again carried out in the spirit of Nordic aesthetics with an emphasis on simple and straight lines. Once again, there will also be information pylons bringing interesting facts about the individual stages and about Finland itself, and the developer is setting them up throughout the complex. Apart from traditional materials and technologies, the developer also plans to use the most modern methods. “In Lappi Hloubětín, we want to work with partial use of spatial prefabrication technology, which enables higher precision and better-quality design,” explains Marek Lokaj. Similar to the Suomi Hloubětín complex, YIT plans to integrate into Lappi Hloubětín a rainwater retention system for the landscape, the system having minimal impact on the environment. There will be a number of elements built there, for instance retention tanks. The obtained water is to be used for watering within the complex.

Everything you need at hand

The advantages of the location include excellent transport accessibility. There is a bus and tram stop near the complex, and Kolbenova and Hloubětín B-route underground stations are just a few minutes away. Residents will also appreciate the easy connection to the Prague ring road when traveling by car. Neither is there a shortage of free time activities. The new district stretches along the Rokytka River, which was revitalized by the developer YIT creating pleasant relaxation zones. An attractive trail suitable for a wide range of recreational and sports use runs alongside. The Lappi Hloubětín project will enrich the entire site with shops and other commercial premises. The existing civic amenities are also varied, including a café, pizzeria, wine bar and grocery store. YIT is also building a nursery school there, which will be in operation from September 2022. Near the complex is a medical facility, swimming pool, post office and shopping centre.