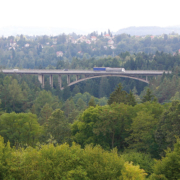 The quality of transport infrastructure in the Czech Republic belongs, according to the report by the World Economic Forum, among the worst in the EU. Nevertheless, its development plays a key role in the development of the state economy.

That is why the National Investment Plan for 2020–50 registers investment requirements of CZK 6 billion for the department of the ministry of transport. That is 77% of the whole plan, which would require about a doubling of the current level of departmental investment. It is evident that this amount considerably exceeds the possibilities of public investment in the Czech Republic and it is probably unrealistic to find financial sources to such an extent. The road network forms one strategic complex and it is necessary to plan its development and maintenance as that, regardless whether it is under state, regional or municipal administration.

The transport department also has a task to develop the so called smart transport system, that is to equip the transport infrastructure and vehicles with modern technologies, which are to increase transport safety significantly, contribute to the continuity of transport, improve quality of the provided service and support alternative fuel powered vehicles (the so called clean mobility). Everyone can see more dense traffic on our roads and motorways, overloaded railway services on suburban lines and full carparks on the outskirts of the capital. Apart from the expansion and quality improvement of the network of spinal roads and motorways, the priority in the Czech Republic is also to attend to the intensive modernization of railway infrastructure and construction of new high-speed lines in a trans-European network. The condition of bridges often decides about the quality and functionality of the individual sections of the network.

In the Czech Republic, a sophisticated system of registration and management of bridges was introduced, which  is based on legal regulations and technical  standards. Nevertheless, the main problem is in the lack of stably allocated financial resources for bridge administration, maintenance and rehabilitation, which should be linked to the value of transport infrastructure within the administration of the individual owners. It is necessary to expect average costs in the amount of a 2% per year of the original investment updated with annual inflation. That means that within 100 years of the planned lifespan of bridges, it is necessary to spend twice the original investment costs for their construction. This area has been considerably underestimated in the long term and the condition of bridges, especially those in regional and municipal administration, keeps getting worse and worse. Nevertheless, road infrastructure will still be expanded considerably. The table states the share of bridges in bad, very bad and emergency conditions, whose load-bearing capacity is reduced by 40, 60 and 80%.

Another problem lies in shortage of human resources. Up to one third of professionally qualified staff  have been lacking over the long term. This can be due to the salary situation in state administration, high level of responsibility and considerable requirements with regards to technical education and experience as well as a shortage of civil engineers in the labour market and a declining interest in studying civil engineering at university.

Part of the construction industry financed from public resources might  have a stabilizing effect in times of crisis – this opportunity should not be missed. The Czech construction industry has an approximately 8% share in total gross added value; it is comparable with the European level and with a multiplication effect of 3.5, the building industry has a big influence on domestic production. Following the last economic crisis after 2009, the construction industry was the one to take longest time to recover from the crisis again. One of the most important conditions for positive development of construction industry is the long-term stability of public investments. The public sector acquires the majority of works from private contractors. The private sector needs the existence of a long-term investment strategy and financing in order to plan their capacities and investment effectively for at least five years ahead. Education, research and development in this area also urgently needs a counter-cyclical policy for public investment.

Qualitative criteria are not a priority

This year, there are obviously enough funds for the preparation and implementation of structures. The question is whether they can be used meaningfully. Recodification of the building law will perhaps be completed next year before election but the professional public is already doubtful that this will contribute significantly to the speeding up of the process of building permit granting. What is more important for transport, water, energy and telecommunication infrastructure is the change to Act No. 416, which is to come to force at the beginning of 2021.

Nevertheless, there are many examples that demonstrate ineffective financial management. I will state at least two. Planning engineers are still selected on the basis of the lowest bid price whereas qualitative criteria are secondary. Providing a design is not optimal for a particular  structure, the contractor has virtually no possibility, within the present system, to submit a successful proposal for a significant variation that would lead to the improvement of construction. This concept is based on the European Directive 2014/24/EU and the judicature of the Court of Justice of the European Union. A year ago, the State Fund of Transport Infrastructure did publish the Methodology for construction improvements, which allows one to proceed in compliance with the international contract conditions of the FIDIC, but it hasn’t been applied in practice yet. It is still complicated from an administrative, legal and time point of view. In the past, proposals for construction improvement were, however, commonly implemented and it was possible to submit them in the phase of a contractor’s submission of a bid. Quality proposal could save costs and speed up construction.

Architectural design competitions allows for a choice of aesthetic, layout, functional and structural solutions of a required structure from many variants with a well-balanced construction price and design quality ratio. In the case of significant bridges and footbridges, they could be utilized more often then. Nevertheless, a result of architectural competitions for bridges often evokes great hesitation in the Czech Republic and the culture of tenders for a proposal lags behind other European countries. The problem lies in the competition’s terms and conditions, which are formulated for the engineering structures only by the Czech Chamber of Architects without any relevant share from the Czech Chamber of Authorized Engineers and Technicians in Construction. In 2013, the International Association for Bridges and Structural Engineering issued a regulation for competitions for bridge design, which specifies that at least half of the members of the committee were bridge engineers. In our country, half of a ten-member jury usually covers architects, another half politicians, and one or two members are structural engineers. No wonder that selected designs are perhaps exclusive but difficult for implementation and also very expensive. The situation, when the winning price of the works  is a multiple of the price anticipated in the architectural competition or when contractors are not found is not an exception. If the original price estimate does not work out, it is sometimes possible to obtain grants.

In our system, political and legal reasons unfortunately take priority over technical and financial ones. The complexity of the building law and the considerably limited possibility of enforcing it during approval processes is partly the result of the fragmentation of competences amongst the individual ministries, where there is no conformity in the systematic approach to the recodification of public building law. Another problem is the process of assigning public procurements and its consequent checking; in the real world, it should use market consultations and competitive dialogues with a professional public more often, especially in infrastructure projects. The Design & Build assigning system should also be used more for technically demanding engineering structures.

The Ministry of Transport of the Czech Republic, the Railway Administration and the Road and Motorways Directorate attempt to deal with the aforementioned issues but it is not a society-wide priority yet. Hard to believe that more bridge failures are expected.