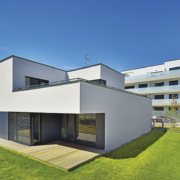 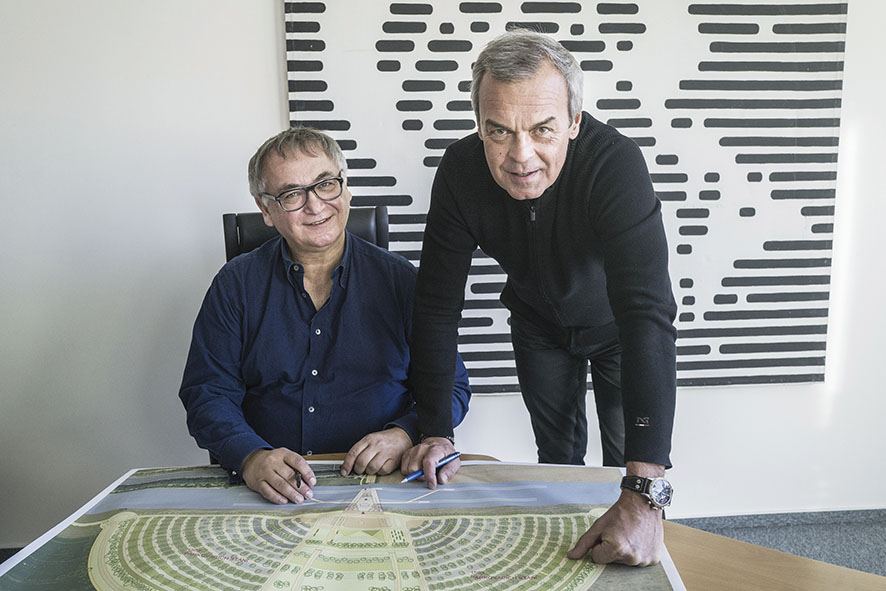 By the end of next year, it will be 30 years since CASUA was entered in the Register of Companies. Nevertheless, the real co-operation between Oleg Haman and Aleš Poděbrad commenced a bit earlier, on 1st July 1990. That means that this year is also a jubilee one.

The company has, over the years of existence of the architectural and planning office, expanded – from a two-member consortium to a limited company for which 70 architects and civil engineers work.

So, you had a reason to celebrate all year…

AP: We have actually been celebrating the whole 30 years… De facto, we started before 1st July 1990 when we both left our jobs – Oleg from Karel Prager’s studio and me from Karel Koutský studio. We both each came with a contract. I needed an architect and Oleg needed a civil engineer. So, we sat down together and started designing claiming that we had gained our freedom and could decide for ourselves. We enjoy freedom with regards to the choice of commission, clients and work. Starting with the 90s, we commenced drawing something that was later stratified. Both work and people were piling up (we didn’t look for it). We really enjoyed the work we did during those 30 years and we enjoy it still.

Can you remember the first procurements?

OH: Aleš was supposed to do the first BMW showroom in Průběžná in Prague 10. When I was leaving Karel Prager, there was a condition upon my leaving: to secure the project for the completion of the primary school Jitřní in Prague 4. So, we both needed to finish our commissions. One was looking for an architect and the other for a civil engineer. We knew each other so we had already started working together some time in March 1990. The name CASUA had already originated then.

What does CASUA actually mean?

AP: We didn’t know what to come up with so the name emerged abbreviated from the Consortium of Architectural Building and Urban Studios. And as Coca Cola was better than Kofola, we turned Kasua into Casua.

It sounds quite exotic…

OH: We knew we couldn’t put full stops there as we wouldn’t be able to register it as an abbreviation, but in the world today, it is possible to register a name but it cannot have a geographical significance and this was not the case. And also, we also found it pleasant from a phonetic point of view.

What was your mutual vision for the future after the first projects you had realized?

AP: I will try to sum it up from my point of view. The two of us complement one another quite well: firstly, we are both different from a character point of view and secondly, we both have our own profession. Our aim was to produce pleasant architecture, bring it to the building stage and ideally be present at the construction. This took the first five to six years until a turning point on my side. In 1996, we started talking with our client about a commission and a year later we concluded contracts for a project in Prague 10, Na Vinici. That really made us shift. We worked on it from the stabilization of the outline plan (there used to be white places in the outline plan then) up to 2004, that being the last final building approval. This project educated us professionally resulting in the expansion of our studio. Then we said that the company wouldn’t have more than 25 people. When we got the procurement, we made the first mistake in our professional life as architects and planning engineers as we focused on one client and didn’t deal with other commissions. We had a lot of work at that time and didn’t have time to think of the future – what was going to happen once the client built it. So, sometime around 2000, we were a little stressed and started expanding our client portfolio in order to always have a principal procurement and some smaller ones to go with it. From a personal point of view, the years between 1996 and 2000 were crucial for me with regards to the growth of the company.

Let’s get to current projects. You participated in the tender for the hospital in Zlín. What else is, figuratively speaking, on your desk?

OH: We won a public business tender in Zlín for a new regional hospital as a member of an association of four entities. Such large procurements always need some sort of co-operation. We were, in this case, the guarantor of the BIM structure, co-ordination of the project and consequently we guaranteed about half the buildings there. More or less, we went through all appeals, confirmations from the Office for the Protection of Competition. We won, which we are proud of, but the political situation has changed and we are awaiting the signing of the work contract. Building a hospital on green land is something you don’t see every day. What is absurd is that they have a shortage of beds in Zlín due to the epidemic and Covid patients are being transported to Brno. So, everything that is going on is just politics…

How were you better in the tender than your competition?

AP: The assignment of the project for the hospital stated the use of BIM. Our advantage was, that in 2004, without having an idea what it was actually about, we had one IT visionary in our company and he brought to our attention the fact that there is software, which can design in 3D. And we bought 27 licences then. We started designing with this software and now, 16 years later, we are able to harvest the fruits of our work where architecture unites technology and information in a model. They are procurements that originated thanks to the fact that we started working this way. That is why we can do projects such as the one for Zlín Hospital or the Bořislavka project. We are working on this with the Aulík Fišer architekti studio. As planning engineers, we are working on the Bořislavka project for KKCG in BIM.

AP: Classically we emerged as an architect and civil engineer – and as we kept gradually expanding the studio, there are about 70 of us there now. We have a particular number of architects and a particular number of civil engineers. They all design on computers with full licences. The architects come up with projects and we draw them. We also accept service procurements, which means that we work for clients and companies who have their own architects.

What projects have you recently realized?

OH: This year, we completed Waltrovka North, a residential complex, including family houses. The residential Project Karlínské dvory II, an interesting project situated between Křižíkova and Sokolovská Streets underwent final building approval and one project in Stodůlky changed hands and we redesigned it completely. This year, we participated in many tenders and with 70 people in our studio we also have many smaller procurements where some are successful and some are not. Which can also happen when a developer is unsuccessful. We, for instance, designed the reconstruction and conversion of a prison building in Mladá Boleslav, turning it into a new centre with a high dominant point. The project is simply lying fallow, but not because of us. So, sometimes we also face frustration that something is not working out, but everyone goes through that. We must be strong and keep going and be able to bear these losses that we experience along the way.

What do you expect in a short-term horizon?

AP: I would stem from this year as what happened at the beginning of the year, February – March – April, because Covid has shaken the projects. They were delayed, some large developers even terminated work and apart from one came back into operation a few months later yet again.

What type of project was mostly affected?

AP: Residential projects as well as one administrative one, which were launched this September. Apart from that we worked on other contracted procurements, so, this year looks better than last year for us. We are slowly growing upwards. And our plan for next year? We always prepare that in advance and stem from tenders we had won or procurements contracted with clients over the long term. Or they are projects that have been agreed upon but are not secured by a contract yet. That means that the prospect outlook for next year still looks positive, whether in our authorial projects or in service activities. We hope that we can succeed in some big tender where we get to the final round. We are currently careful optimists.

Will you mainly focus on residential projects?

OH: There is generally a shortage of apartments. Apart from the large complexes, there are many smaller items whereby the city structure is being completed by construction in gap sites, some buildings are being demolished, others built… all this has always been here and always will be here. The question is what housing quality is to be like. Many developers first have an analysis done and only then do they make decisions. I don’t think we have to worry that we wouldn’t have work in residential projects, providing nothing fundamental occurs.

Your projects don’t only apply to Prague…

OH: Zlín proves that. We also have some smaller projects outside Prague and in Slovakia but not a large project like the project of Bratislava airport as we did in the past.

The CASUA studio is involved in a number of foundations and professional organizations. You also often take part in trade fairs and not only in the Czech Republic…

OH: In 2007, we received an offer to become a member of the Equator Europe Architects network, which included some 13 studios from 13 countries. We accepted that offer. We saw sense in that co-operation; one of the main moments is the fact that we participate in trade fairs, for instance MIPIM in Cannes, together. We are basically the only Czech studio with our own – though small – stand. The 2008 crisis naturally saw a depletion of companies from Western Europe so some studios don’t exist anymore or have withdrawn. This resulted in the reduced size of Equator. Now, it is mainly dominated by Scandinavian countries and us. Surprisingly, all countries that play hockey – with headquarters in Stockholm. What is interesting is the fact that Swedish Equator Stockholm is a member of the Swedish Green Building Council, ie. a recognized leading institute in the world of permanent sustainability – and we have the opportunity to draw on the latest knowledge from them. The fact that local developers are not that interested in such knowledge, or at least making it seem like that, is another issue. Nevertheless, this gives us access to very valuable information. We are also a member of the Czech Green Building Council and the Czech-Israeli Mutual Chamber of Commerce. When looking for an opportunity as to how to contribute to charitable purposes, we picked what attracted our attention – the Arnošt Lustig Award for courage, bravery, humanity and justice. The condition allowing for the support of this award was the entry to the Czech-Israeli Mutual Chamber of Commerce where we found that it works very well and that members include many skilful people and is also interesting for us from a business point of view. Which means everything fits in nicely.